Vision
To support the Los Angeles Harbor Department and promote a safer, less vulnerable community with the capacity and resilience to cope and respond to all hazards and disasters.

Mission
To administer a comprehensive emergency management program in partnership with all departments, agencies, operating units, administration, and neighboring jurisdictions to save lives, protect property, safeguard the environment and support the mission of the Port of Los Angeles.

Comprehensive
Consider and take into account all hazards, all phases, all stakeholders and all impacts relevant to disasters.

Integrated
Ensure unity of effort among all levels of government and all elements of the community including, public safety, non-governmental organizations and the private sector.


Flexible
Use creative and innovative approaches in solving challenges.

The Port of Los Angeles observes the National Incident Management System (NIMS) which is a comprehensive system that improves local response operations through the use of the Incident Command System (ICS). Complementing this system is the use and adherence to the California Standardized Emergency Management Systems (SEMS). These two systems ensures and promotes the development of cross-jurisdictional, statewide and interstate regional mechanisms for coordinating response and obtaining assistance during a large scale or complex incident.

POLA Emergency Management Coordinators (EMCs) play a key role in the POLA Disaster Service Worker (DSW) Program. EMCs have been deputized to witness the signature of new employee Loyalty Oaths. This allows new City employees to get a brief orientation on the POLA Emergency Management Program emphasizing the critical role they may play in disaster. Our DSW’s continue to support our City and we are proud of their hard work. 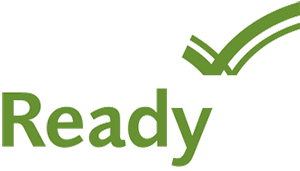 Earthquakes remain a threat to our community. They can and will – without notice – cause minor or major damage to buildings, roadways, homes, schools and our neighborhoods. To assist in training all our employees and stakeholders in how to react, POLA annually participates in the Great Southern California ShakeOut earthquake drill. The first drill was organized by the Earthquake Country Alliance and took place on November 13, 2008. At the time, it was the largest earthquake drill in U.S. history, with 5.3 million participants.

The Great California Shakeout, now referred to as the Great Shakeout, is part of the Port's employee preparedness program. For more information on how you can prepare for earthquakes, visit ready.gov/earthquakes. 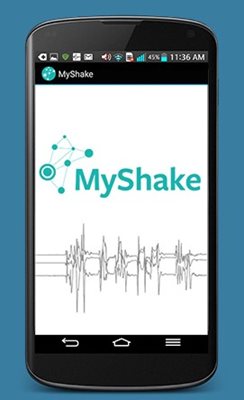 The MyShake™ app – developed by the UC Berkeley Seismology Lab, sponsored by the State of California Office of Emergency Services – is the first app powered by ShakeAlert® to provide statewide earthquake early warning alerts. The app is one of the delivery modes of the California Earthquake Early Warning System.

MyShake is available in both English and Spanish. Residents who want to receive earthquake early warning notifications should download the MyShake app, available on Apple store and Google Play.

Please Be Aware, the ShakealertLA Mobile App was sunset on December 31, 2020

For life or death emergencies that require the immediate response of police, fire, or paramedics, dial 911.

In the event of an emergency, the City of Los Angeles Emergency Management Department will post updates and relevant emergency information at emergency.lacity.org/notifyla.

Within the City jurisdiction, you can dial 311 if you need further assistance accessing City services. This number is available toll-free 24 hours a day, seven days a week. For those outside the City jurisdiction, call (213) 473-3231. Callers within Los Angeles, Ventura, Orange, San Bernardino and Riverside Counties can call (866) 4LA-CITY or (866) 452-2489, toll-free.

For additional information about emergency preparedness programs in the City of Los Angeles, contact:

Success in saving lives and property is dependent upon timely dissemination of warning and emergency information to citizens in threatened areas. With the potential threat of earthquakes, wildfires, storms, and hazardous materials spills, it is important for residents to know how the Port of Los Angeles, City of Los Angeles and the Los Angeles County Operational Area would notify the community before, during, or after an emergency. It is essential that information be provided timely. Listed below are the various ways emergency alerts and warnings may be disseminated to the community.

Wireless Emergency Alerts
Wireless Emergency Alerts (WEAs) are used to send concise, text-like messages to WEA-capable mobile devices during emergency situations. WEAs are sent by your state and local public safety officials, the National Weather Service, the National Center for Missing and Exploited Children, and the President of the United States. Learn more at calalerts.org.

Emergency Alert System (EAS)
Emergency information is broadcast directly via the Los Angeles County Sheriff's Department to the various media outlets. For emergency events and conditions of concern a broadcast message is disseminated to the public via radio and television stations. The message is a voice message only, with text messages scrolling on the television screen.

Cable Television
The City of Los Angeles has an agreement with the various Cable franchises to provide the public with alert and notification of various disaster situations via EAS. The City's cable channel 35 (LA CityView) will also provide directions to the community via scrolled information and through live delivery. (LA CityView is not available with satellite providers).

AM Radio
Listen to KNX 1070 AM for regional emergency alert information for the Los Angeles County area.

Satellite Radio
SiriusXM complies with FCC regulations requiring them to carry national emergency alert announcements similar to those heard on terrestrial radio. SiriusXM provides nationwide alerts from the EAS on all of its channels. State and local emergency alert messages and information specific to major metropolitan markets are provided on SiriusXM's local traffic and weather channels (channels 132 to 140, with Los Angeles specifically on 140). SiriusXM does not provide state and local emergency alert messages on any of its other channels. SiriusXM also carries weekly and monthly emergency alert test announcements on all channels. These tests can be heard only on our satellite channels; they cannot be heard on their audio channels heard online, on Sprint phones, the DISH Network (Sirius packages), or on AT&T or Alltel (XM packages).

Amateur Radio
The Emergency Operations Organization (EOO) of the City of Los Angeles has designated the Los Angeles Fire Department (LAFD) to manage its amateur radio program under the Auxiliary Communication Service (ACS) agreement with the California Governor’s Office of Emergency Services. The City of Los Angeles Auxiliary Communication Service Radio Net meets each Monday evening at 19:30 (7:30 p.m.) for the purpose of passing radio traffic to ACS members. The LAFD manages the ACS Monday Night Radio Net for the EOO of the City of Los Angeles. Routine matters such as current events, upcoming training and drills are addressed during the Monday Night Radio Net. ACS volunteers are considered vital in supporting a wide variety of Department operations, especially in times of duress.

Amateur Radio Operators (aka 'Ham') not affiliated with the Los Angeles City ACS are invited to monitor the Net or are requested to take their traffic to another frequency until the Net is completed. If you are a licensed Amateur Radio Operator, or, you wish to become one through LAFD's Mentoring Program, join this frequency on Mondays at 7:30 p.m: 147.30 MHz (+) PL-110 or 224.68 MHz (-) PL-114

With Los Angeles Fire Department (LAFD) stations located in each direction of the 7500-acre port complex, the Port of Los Angeles is the safest in the nation in terms of fire protection and response. The addition of one of the most powerful fireboats in the world, Warner Lawrence, enhanced this fire safety rating, with such a strong spray that shoots water directly over the 385-foot high Vincent Thomas Bridge. 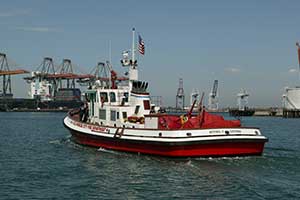 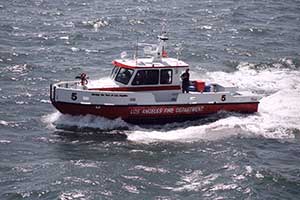 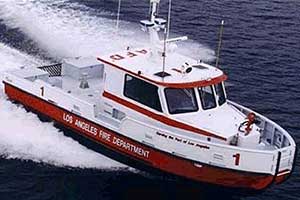 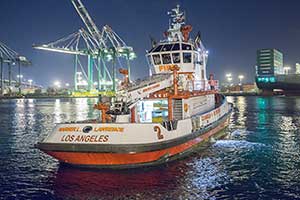