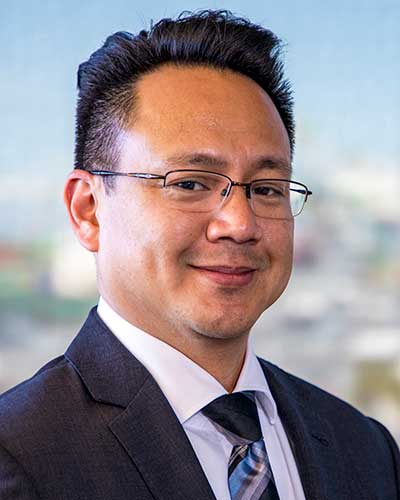 David Libatique is the Deputy Executive Director of Stakeholder Engagement for the Port of Los Angeles, a position that oversees and manages all communications on behalf of America’s Port® via the Community Relations, Media Relations, Government Affairs, Trade Development, and Labor Relations and Workforce Development Divisions.

In this role, Libatique works with diverse stakeholders, including local communities, organized labor, beneficial cargo owners, terminal operators, international customers, shipping and cruise lines, railroads, the trucking industry, media, and regulatory agencies to advance the Port’s goals and initiatives. He also interacts on a broader scale with an array of local, regional, statewide, and national elected officials and stakeholders.

Working alongside Port of Los Angeles Executive Director Gene Seroka, Libatique helped to spearhead the Logistics Victory Los Angeles (LoVLA) COVID-19 response effort in March 2020 to assist in getting critical personal protective equipment (PPE) into the hands of healthcare workers. Throughout the pandemic, Libatique has worked to build relationships with public and private sector partners and further guide the initiative’s efforts.

Libatique first joined the Port in January 2011 as Senior Director of Government Affairs, where he led the Port’s intergovernmental advocacy at a critical time of increasing engagement with local, regional, state, federal, and even transnational and international levels of government.

Prior to joining the Port, Libatique served as Mayor Antonio Villaraigosa’s Director of Energy Policy, where he was responsible for advancing the Mayor’s environmental policies at the Los Angeles Department of Water and Power. Before assuming that role, he served as the Mayor’s Senior Policy Analyst and acted as a liaison with the Port of Los Angeles, where he advanced priority initiatives, including the Clean Air Action Plan and Clean Truck Program.

Libatique has conducted extensive experience in economic research, including working as a Research Analyst at the World Health Organization in Geneva, Switzerland. There, he was a part of Working Group VI of the Commission on Macroeconomics and Health that analyzed the economic impact of investment in improved health outcomes for poor and middle-income countries.

Libatique holds a bachelor of arts in economics from the University of California, Berkeley and a master of public policy from the Harvard Kennedy School.