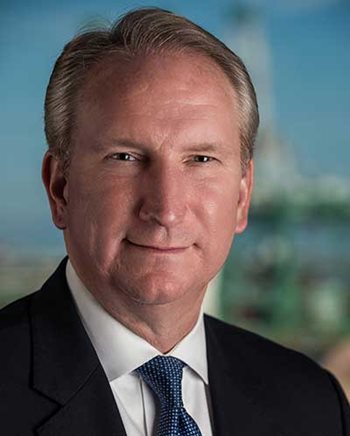 Gene Seroka is the Executive Director of the Port of Los Angeles, the busiest container port in North America. Nominated by Los Angeles Mayor Eric Garcetti on May 27, 2014, and confirmed by the Los Angeles City Council on June 11, 2014, the Port has experienced a series of historic, record-breaking performances since his appointment.
As Executive Director, Seroka interacts with a wide range of stakeholders, including Port customers around the globe, industry partners, elected and appointed officials at all levels, business leaders and local residents. A respected global trade expert, Seroka has advocated for rules-based trade agreements that benefit American exporters and manufacturers.
Since the pandemic-induced buying surge generated by American consumers in the second half of 2020, the Port of Los Angeles has eclipsed multiple monthly cargo records and recorded eight out of 10 highest-performing quarters in its 115-year history. The Port set two new milestones for the Western Hemisphere in June 2021 as the first port to process 10 million Twenty-Foot Equivalent Units (TEUs) in a 12-month period and in May 2021 the first port to process 1 million TEUs in a single month.
Seroka has distinguished himself as a leader throughout his illustrious career in shipping, global logistics and executive management. The Containerization & Intermodal Institute named Seroka the 2021 recipient of the Connie Award, one the most coveted honors in the maritime industry. Lloyd’s List has recognized Seroka as the preeminent source on the supply chain, which earned him a spot in the 2021 Top 100 most influential people in shipping. Also in 2021, the Inland Empire Economic Partnership honored Seroka with its Lifetime Achievement Award, recognizing decades of leadership and accomplishments in the supply chain, logistics and maritime industry. In 2020, Supply Chain Dive named Seroka Executive of the Year for his leadership throughout the pandemic. Seroka has been named one of the most influential people in Los Angeles by the Los Angeles Business Journal and featured on the LA500 list for the past seven years.
As chief of America’s top port, he is responsible for managing a more than $1.9 billion budget, advancing major capital projects, growing trade volumes and promoting innovative, sustainable practices that strengthen the region’s economy. Under his direction, the Port has taken a leadership role in adopting cutting-edge technologies to improve the reliability, predictability and efficiency of the flow of cargo across global seaborne trade, including the launch of the digital information portal Port Optimizer™ and companion cargo-tracking tools Control Tower, Signal, Return Signal and Horizon.
Throughout the pandemic, Seroka—who lived in China during the 2002-2004 SARS epidemic—has led the Port’s response to the global health crisis, keeping cargo flowing as an essential service to the nation. In March 2020, Mayor Garcetti named Seroka the Chief Logistics Officer for the City of Los Angeles, while concurrently serving as the Port’s Executive Director. Seroka also leads Logistics Victory Los Angeles (LoVLA), which has distributed more than 10 million units of personal protective equipment (PPE) to nearly 250 organizations since its inception.

Seroka’s footing in the maritime industry was established as a sales support representative at American President Lines (APL) Limited’s Cincinnati office in 1988. After several key overseas positions in China, Indonesia, Singapore and the United Arab Emirates, he returned to the U.S. in 2010 to become President – Americas for the shipping line in Phoenix where he managed APL’s Liner Shipping business, including 1,000 employees, and was responsible for all commercial, port terminal, intermodal, land transportation and labor activities throughout the region.
Seroka holds an MBA and Bachelor of Science in Marketing from the University of New Orleans.