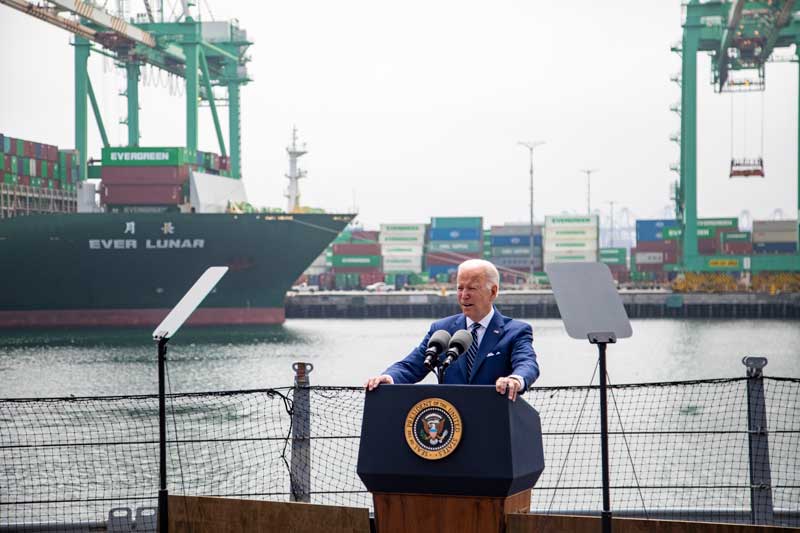 SAN PEDRO, Calif. – June 10, 2022 – President Biden today visited the Port of Los Angeles, delivering a speech aboard the Battleship USS Iowa, where he noted progress on the nation’s supply chain challenges and thanked waterfront workers and terminals for their efforts in processing record amounts of cargo amid the pandemic.
“Today, we had the honor and privilege of hosting the 46th president of the United States,” said Port of Los Angeles Executive Director Gene Seroka. “The Biden-Harris administration’s convening power of public and private stakeholders has helped drive goods to American consumers and businesses.
“Our ongoing work with the president and his administration continues to focus on our nation’s ports and supply chain resiliency. His visit to the Port of Los Angeles is a recognition of the tremendous effort across the maritime supply chain to move a record volume of cargo for the American economy.”
The busiest seaport in the Western Hemisphere, the Port of Los Angeles is North America’s leading trade gateway and has ranked as the number one container port in the United States for 22 consecutive years. In 2021, the Port facilitated $294 billion in trade and handled a total of 10.7 million container units, the busiest calendar year in the Port’s 115-year history. San Pedro Bay port complex operations and commerce facilitate one in nine jobs across the Southern California counties of Los Angeles, Orange, Riverside, San Bernardino and Ventura.
click here for photos