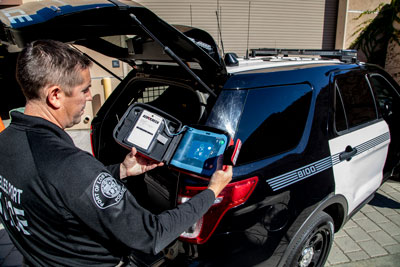 SAN PEDRO, Calif. – Oct. 29, 2018 – In an effort to further boost its capabilities to protect the public in emergency situations, the Los Angeles Port Police has placed  automated external defibrillators (AEDs) in all its patrol and specialty vehicles. The 50 new fleet-deployed devices are in addition to several dozen already in place at permanent locations throughout the Port of Los Angeles.

An AED is a portable device that delivers an electric shock through the chest to the heart. AEDs are often used to revive unconscious or non-responsive individuals who are experiencing a cardiac event. A victim’s chance of survival declines rapidly for every minute a normal heartbeat isn’t restored.

“When someone has suffered a sudden cardiac arrest or is non-responsive for other reasons, quick access to a defibrillator can mean the difference between life and death,” said Port Police Chief Tom Gazsi. “Our officers now have life-changing equipment right in their vehicles, which provides an added measure of readiness to our Port community, workers and employees, as well as residents and visitors.”

All Port Police officers and staff receive regular AED training. This instruction is part of safety and first-responder training conducted every two years, which also covers CPR and first-aid.